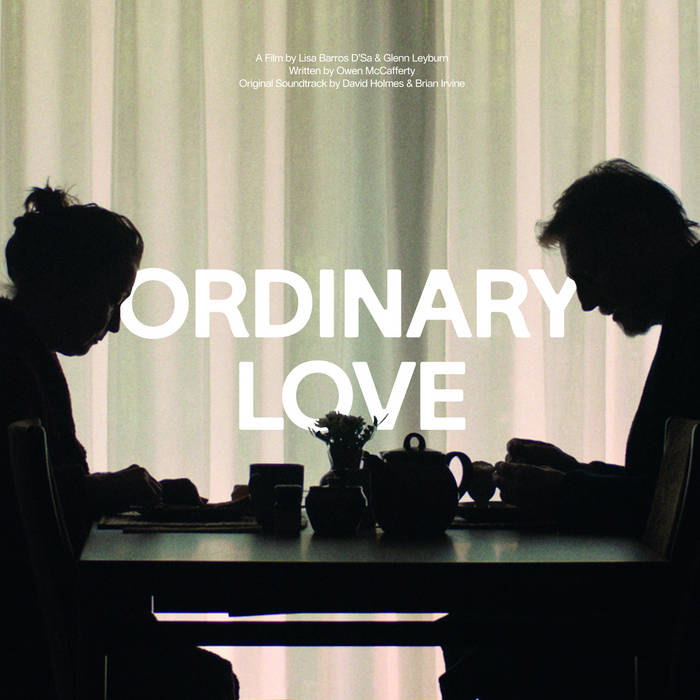 Touch Sensitive is proud to present it's third release with Ivor Novello and Bafta Award-winning modern master of the soundtrack, David Holmes, working in collaboration with composer Brian Irvine.

Set in Northern Ireland, directed by Holmes’ longtime friends Glenn Leyburn and Lisa Barros D’Sa (Good Vibrations, Cherrybomb), and written by legendary Irish playwright Owen McCafferty (whom Holmes has known for forty years), the film tells the extraordinary story of Tom (Liam Neeson) and Joan (Lesley Manville) - their life and love as they enter the uncertainty and upset of Joan’s cancer diagnosis.

In a career rich in highly personal work, Ordinary Love is up there with the most affecting in Holmes’ canon.
Recorded between Abbey Road and Holmes’ own Drama Studio, the soundtrack features input from some of his most trusted collaborators. Holmes states: “I worked on the score with Brian Irvine. He is a longtime friend and the first person I ever had studio experience with 27 years ago. It felt important to work with Brian on this as his father (Ronnie), Owen’s father (Gerry) and my father (Jackie) - all now deceased - were great friends through a shared love of Point-to-Point horse racing and their work as bookmakers. For the three of us to work together on this was an opportunity I couldn’t ignore.”

There is also contributions from Holmes’ bandmates, Jade Vincent and Keefus Ciancia, who comprise the trio Unloved. The group’s sound has been central to the much lauded Killing Eve soundtracks, which saw Holmes and Ciancia pick up a Bafta in 2019.
Vincent provides a stand-out performance - lending her haunting and smoky vocals to the albums centrepiece and final track - ‘Isn’t It So’.

The score to Ordinary Love wasn’t inspired by any other soundtrack or even musical composition but by a mathematical theory called The Game of Life. Devised by mathematician John Conway in 1970, The Game of Life is not your typical computer game. It consists of a collection of cells which, based on a few mathematical rules, can live, die or multiply as the cells form various patterns throughout the course of the game.
“Because of the nature of the story, this really spoke to Brian and I in a musical sense and we started to create the score with the notion that the notes in each cue resembled human cells, living and dying as Joan’s journey with cancer unfolded.”

Much like the film's recurring motifs - such as the couple's regular hospital visits - the score uses gentle rhythms and repetition to underline the comfort and balance in Tom and Joan’s routine - even though a potentially life-changing event looms over them.
The score grounds the listener whilst providing an almost dreamlike blank canvas in which to live and to love.

“Creating the score to Ordinary Love was by far the most challenging I’ve ever worked on. The film is a very delicate piece and Tom and Joan’s everyday life is very normal so trying to create a soundtrack that not only felt like their world but had its own unique voice with real emotion wasn’t easy.”

“David Holmes and Brian Irvine’s perfectly judged music is as quietly powerful and profoundly moving as the film itself. Beautiful”
Mark Kermode

“A woozy, uplifting cloudscape with flashes of sunlight and an unforgettable final track”
Mark Cousins